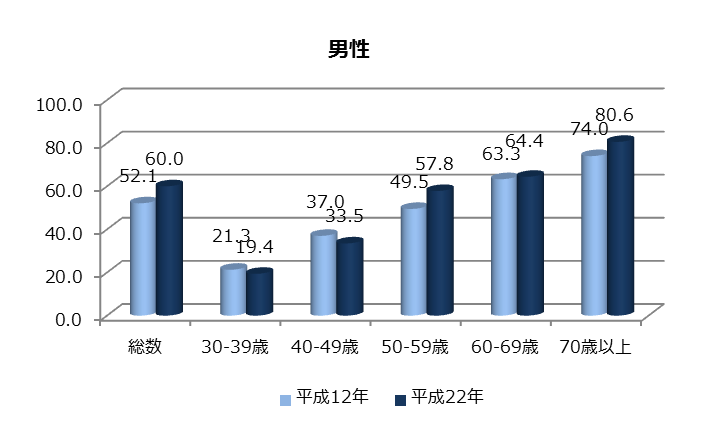 The heart exerts pressure on the blood in order to pump it to every corner of the body. Hypertension is a condition in which the pressure exerted to pump blood becomes too strong, putting a strain on the walls of blood vessels.
However, if high blood pressure is left untreated for a long period of time, it can lead to arteriosclerosis, which can easily cause cerebrovascular diseases such as stroke, heart disease, kidney disease, and many other diseases. According to the “Hypertension Treatment Guidelines 2009” of the Japanese Society of Hypertension, the standard values for hypertension are 140/90 mmHg for office blood pressure and 135/85 mmHg for home blood pressure.

As you can see from the figure on the right, the majority of men in their mid-40s and women in their 50s become prevalent in hypertension*.
Hypertension is a “national disease,” with one out of every two Japanese over the age of 40 said to be a patient. One of the causes is the Japanese diet with its high salt intake. It is said that there are 40 million hypertension patients in Japan as a whole.

Is a high-sodium diet really bad for high blood pressure?

High blood pressure puts pressure on the arteries, the blood vessels through which oxygen-rich blood passes. As a result, complications such as the following are more likely to occur

≪Complications in the arteries≫
As the walls of blood vessels become damaged and brittle due to atherosclerosis, a mass tends to form on the wall of the aorta where strong pressure is applied.
This mass is called an aortic aneurysm, and if left untreated, it will grow larger and larger and eventually cause the aorta to rupture.

≪Complications that occur in the kidneys≫
The walls of the heart, which pumps blood to the aorta, become thickened due to continuous strong pressure on the walls. This is called cardiomegaly, and as cardiomegaly progresses, heart failure is more likely to occur. In addition, when the coronary arteries of the heart become narrowed due to atherosclerosis, blood flow may be temporarily interrupted. This is an attack of angina pectoris, which can lead to a myocardial infarction.

≪Complications in the arteries≫
As the hardening progresses in the small arteries of the kidneys, the kidneys become harder and smaller, causing a decline in kidney function. If the disease progresses further and leads to renal failure, dialysis is required.

≪Complications of the eyes≫
As the arteriosclerosis of the retina progresses, small hemorrhages and white spots start to appear on the retina. If the disease progresses further, visual impairment may occur, and if it leads to fundus hemorrhage, there is a risk of blindness.

②Take potassium.
Potassium helps to remove excess salt (sodium) from the body. This has been shown to lower blood pressure. Foods that contain a lot of potassium are milk, fish, natto (fermented soybeans), apples, bananas, and spinach. However, people with kidney problems should be careful not to take too much.

③Weight loss and exercise
The more visceral fat a person has, the higher their blood pressure tends to be.
Obesity (high visceral fat) has been shown to be a major risk factor for hypertension. In particular, visceral obesity is closely related to increased blood pressure, and there are reports that blood pressure decreases with weight loss. Exercise changes the hormones, blood, and sympathetic nervous system in the body to lower blood pressure. Thirty to sixty minutes of aerobic exercise daily is effective.

④moderation in drink
Alcohol consumption temporarily lowers blood pressure, but if it becomes a habit, it can raise it. Try to drink in moderation, such as a medium bottle of beer or a little less than two glasses of wine.

⑤No Smoking
The nicotine in cigarettes excites the sympathetic nervous system and thus raises blood pressure. Cigarettes also increase the risk of angina pectoris and myocardial infarction because they also increase arteriosclerosis. It is advisable to quit smoking.

⑥stress reduction
Mental stress can cause a temporary increase in blood pressure. When stress is repeated, the sympathetic nervous system remains in a state of tension, causing blood vessels to constrict and blood pressure to remain high.
The normalization of excessive physical fatigue can lead to high blood pressure, so it is important to relieve stress well.

Regarding the treatment of hypertension

In most cases, after 180 days, general insurance will not cover you for treatment of hypertension. If you go to a large hospital in such a case, you will have to pay a lot of money. At our clinic, however, we are able to treat hypertension at a lower cost than large hospitals. Of course, in the event of major complications, we can refer the patient to a major hospital.